Kai Suites, Singapore: A luxury hotel for new parents (and their babies)

(CNN) — Ask most new parents what they want the most, and they might say help with the baby, prepared meals or a good night’s sleep.

At Kai Suites, an uber-luxurious hotel for postpartum moms in Singapore, they can get all of those things — for a price.

Kevin Kwee, the hotel’s owner and operator, tells CNN Travel that his own experiences as a new parent gave him the idea to open Kai Suites.

“As a father of four children and having journeyed with my wife through different confinement experiences, I fully understand the importance of pre-natal education, postpartum recuperation and restoration as well as the care needed for both mother and baby during this golden period — not only physically but also mentally and emotionally.”

Expectant parents normally book their rooms once they’re about 6-8 weeks from the estimated delivery date. Once mother and baby are cleared to leave the hospital, a “guest relations officer” and a nurse will meet them at the exit, put them in a limo and escort them to Kai Suites to get settled.

The whole process is similar to checking into a luxury all-inclusive, but with more medical personnel.

So far, nearly all the guests have been Singaporean locals — which is to be expected during a pandemic where travel is mostly off limits — but Kwee makes no secret that he hopes to attract an international clientele in the future. 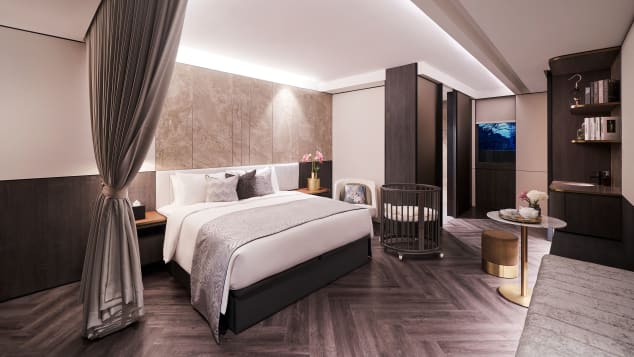 Kai Suites has 18 private suites, and while extended families are welcome to come by and visit, only partners and spouses are encouraged to stay the night — all the better for family bonding.

Another request from new parents is that they want to meet other people who are in the same situation. Kai has set up shared areas where the guests can meet and mingle with each other — between massages, doctor visits and afternoon naps, of course.

While this postpartum hotel is a new concept in Singapore, the practice has a rich history throughout Asia. In China and Chinese-speaking communities around the world, the concept of zuo yue zi, or sitting the moon cycle, is still widely practiced.

During this first month postpartum, women who have given birth are often cared for by their families in specific ways so that they have as much time and energy as possible to care for themselves and their infants. This can include drinking special teas and eating healthy foods that help to restore their bodies and bring their iron levels back up.

While some more modern Chinese consider these practices relics of a time when women had less access to health care and were more likely to die of sepsis or other post-childbirth ailments, contemporary “confinement centers” are still widely used and can cost tens of thousands of dollars.

Other centers, like Nadora in the Malaysian state of Selangor and Gem Care in Taipei, combine modern hotel amenities with traditional practices.

Kai Suites seems to be practicing the combination of traditional care and modern captialism.

Even though the hotel only opened in November 2020, Kwee is already looking to the future. He plans to expand the brand by launching a line of food, traditional Chinese medicine (TCM) and health and beauty products aimed at new moms.